We have released a new version, with polar coordinate graphs added. Polar coordinates are a useful type of graphs: you can draw circles and spirals with them. Instead of having x-y pairs, you have rotation and radius pairs: the radius changes as the angle goes from 0 upwards.

For example, to draw a simple spiral, simply enter f(θ)=θ. Then as the angle goes from 0 to 8π, the radius increases as well, resulting in a simple spiral. But you can also create much more complicated figures. See the image on the right, can you guess the formula? 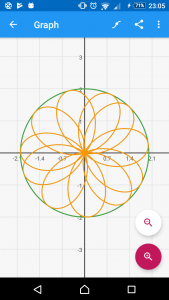 However, polar graphs are much more powerful than just drawing good looking flowers. For example, in physics they can be used to analyze centrifugal forces. The centripetal and centrifugal forces around a sphere can be naturally described with polar coordinates that helps visualization.

Other changes in this version: